Our family had a wonderful weekend camping at Lake Bob Sandlin. We got back into camping about a year and a half ago. Here are some of the camping trips I’ve blogged about:

The boys didn’t have school on Friday, so we headed out after lunch. The campground is located in Pittsburg, TX, and hour and forty-five minutes from our house. The boys watched Finding Nemo, and then we were there. I had booked a spot with a screened shelter. It’s first come first served, and we were thankful to get a great site.

We’d had a lot of rain in the morning and were expecting more in the afternoon, so Brian wanted to get the tent set up ASAP.

Camden loves the Muddy Puddles episode from Peppa Pig, and he was thrilled to reenact it in his rain boots. 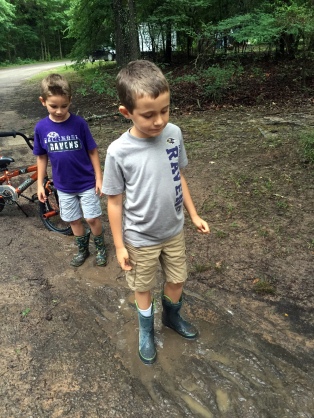 So glad we wore rain boots because it was pretty messy and definitely more fun with boots.

The boys love having their bikes when we go camping, but they do take up a lot of space. Brian purchased a metal cargo carrier before our last camping trip to tote the bikes. It’s a big help. We grabbed a trail map from the office. The boys rode a lot near our camp site, but we only did one trail. It was really muddy, and even though the .64 mile trail was listed as easy, it was a bit much on Camden’s adaptive bike. 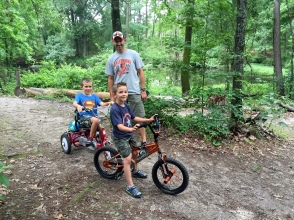 Meals were yummy and fairly minimal effort, as we prepped as much as possible beforehand.

I love this picture of Camden in front of the tent. The kid is one happy camper! If you are reading this blog, odds are good you are aware of the statistics on ASD kids wandering to water. When we camp, we always make sure an adult has their eyes on Camden. There are times when Brian and I are both working on a task, and that’s when I’ll have Camden sit in one of our camping chairs with his iPad. I am able to keep my eyes on him. He certainly enjoys his electronics, but here is how much he loves camping…I was helping Brian with a meal and told Camden to sit in a chair and watch his iPad. He tells me “no thank you.” SO COOL!!! He’d rather ride his bike, drive the RC cars, or play! Play hasn’t/doesn’t always come easy, so I was elated! 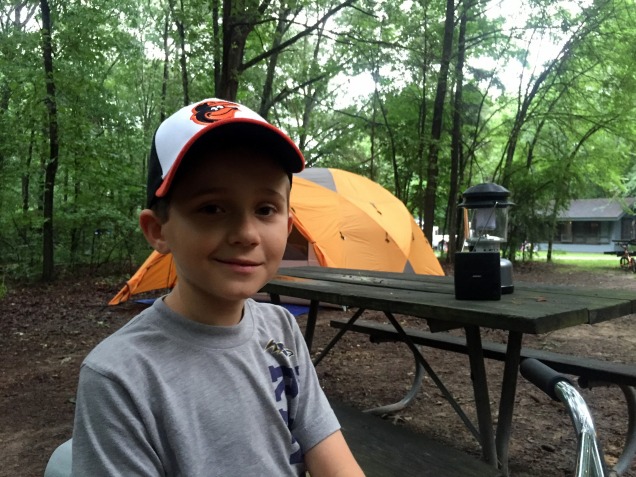 Happy camper poster child. Notice the lights behind him? That’s how the camping veterans roll. Crazy how much more fun it is with lights. Kind of magical. I think it’s an essential item now.

The boys spend a lot of time on the remote controlled cars when we camp. It’s a fun activity for them to do together. We have the Rock Crawlers  and they’ve been a good fit for us. 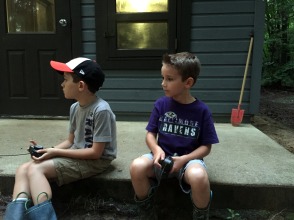 The campground has a playground which we enjoyed for a bit. 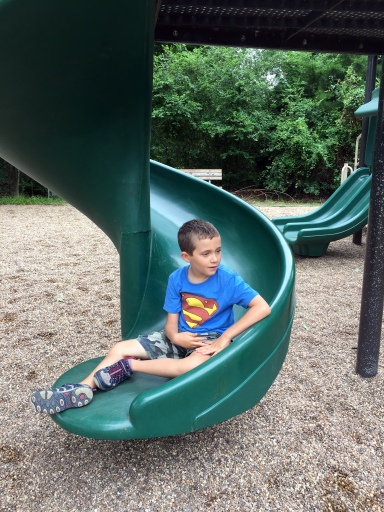 There was also a small fishing pier. It was really crowded so we basically walked onto the pier, turned around, and walked off. See how impressed they look? 😉

A sandy beach area is on our short list, but apparently I didn’t do all of my homework. There was a swimming area, but no sandy beach. You just kind of jump in. Probably not a big deal for most folks, but our boys can play in the sand for hours. Here’s the swimming area entrance to give you an idea. 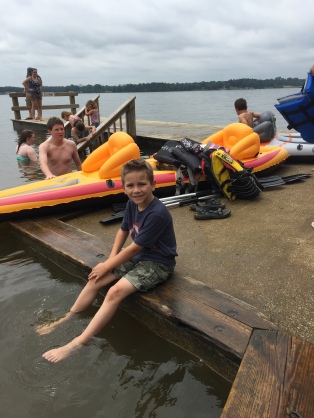 The weather was a bit mild the first day we swam, but hot the second day. We had a blast…well, except for Carson saying he was cold. This is when the sandy beach would’ve come in handy. Camden had gotten two ant bites and could barely walk on Sunday, so it was nice to hang in the water where he didn’t have to put weight on his foot.

Brian bought me a hammock for Mother’s Day which we all enjoyed on this trip. Camden spent the majority of the day in it after he got the ant bites. Carson napped in it twice. 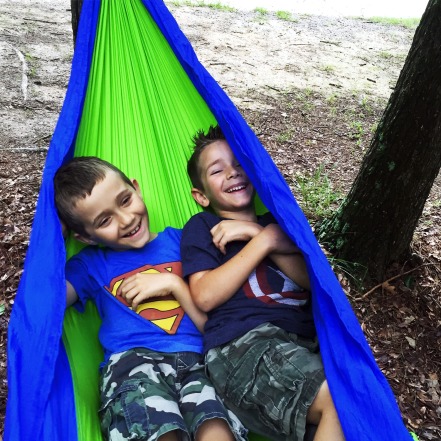 Tent sleeping is always challenging. Thankfully, Camden slept every night. Not sure it was all the activity or the Benadryl and melatonin. Whatever. The boys and I played fruit basket turnover with our sleeping arrangements. I’m thinking twin size air mattresses for all of us is the way to go. Here is our tent set-up: 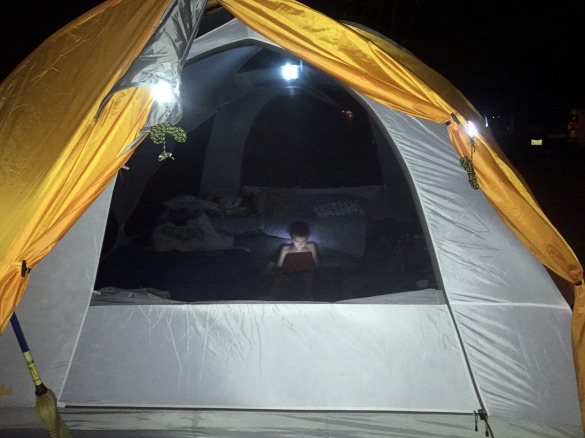 It was a bit warm and humid for comfortable sleep and there was some insect screaming. My quick Google search seems to point the finger at the cicada. What a dumb way to attract a mate, if you ask me. The last night we were there, random loud fireworks were going off which was disturbing to my boys who don’t like super loud noises.

We did venture to Wal-Mart one day. It’s only 9 miles from the campground and on the long list of things we forgot to pack, chocolate was one of them. What were we thinking?! So we had to go and rescue the chocolate. On the way back, we took a picture in front of the entrance. Every time we go to a state park, I always comment about getting a picture in front of the sign, but we never have until this trip. Not our best family photo.

Here’s Camden on the pathway between our site and the bathroom. While Brian is in charge of bath duty for the boys, I will say he’s gotten it down to an art now. The kids are much better about showers these days, which helps. They go to the showers in their swimsuits and water shoes. Brian takes a canvas bag with toiletries and towels to hang up. There is always so much water on the floor, and he doesn’t want the boys touching anything, so he tries to keep it as stream-lined as possible.

We stayed at screened shelter 85 and would recommend it.

The boys watched Cars on the short trip home. Lots of laughter from the back seat. =)

YAY for another successful camping trip! Woohoo!! I love making these memories with my crew!