In the spirit of Autism Awareness Month, I was hoping to visit Camden’s class to educate the kids about autism. I searched the internet for sample letters or ideas on how other parents had navigated this. Not much luck.

Today I had the opportunity to talk with Camden’s general education class about autism. I think it went well, and I’d like share in case it benefits other parents. Camden’s teacher and I spoke about expectations. I composed the letter below, and it was sent home to the parents last week: 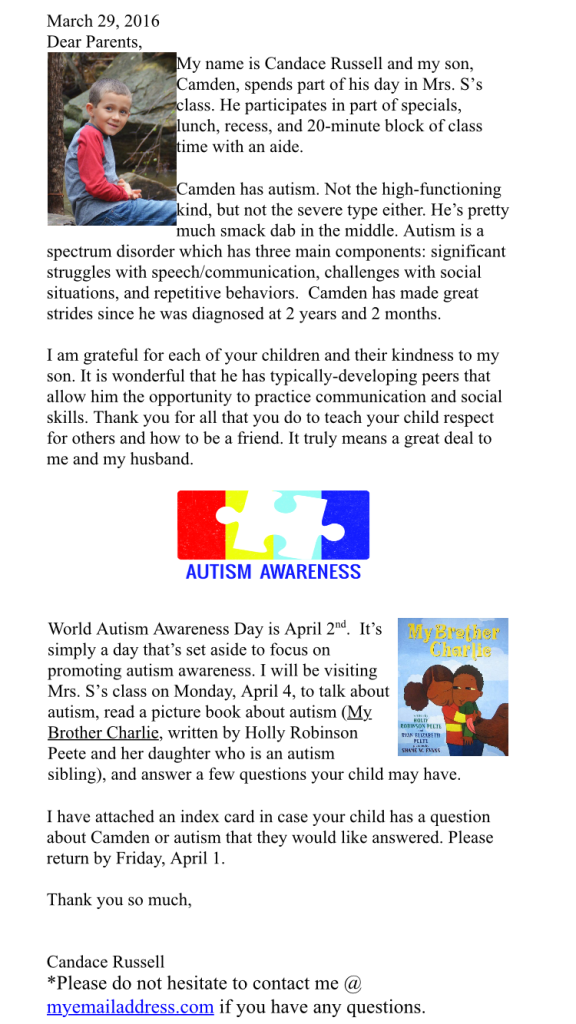 I had 30 minutes with the class. Not a ton of time to cover such a big topic, but it helped me focus on what was most important. I introduced myself and jumped right in to “What is Autism?” We talked about autism being a neurological and biological disorder that affects communication, social interaction, and exhibits repetitive behaviors. While people with autism have those three characteristics, autism is a spectrum disorder and there are varying degrees. I emphasized that quote we’ve all heard numerous times, “If you’ve met one person with autism, you’ve met one person with autism.”

We went over the CDC’s autism statistics. 1 in 68 in the US have autism. 1 in 42 boys. I made sure they knew that unlike Strep or a cold, that autism is not contagious. I showed them a picture of a child with Down Syndrome, and talked about various special needs, like Downs, that people could see from the outside. Autism is different. When people look at Camden, or other people with autism, they look like everyone else. That can be tricky since Camden looks neurotypical, people often expect him to act a certain way.

I made the graphic below that went home with the kids to point out some of the ways Camden is similar to his peers and some ways he is different. I wore my Different Not Less tee and drove home the point that Camden is different than them in several ways, but that doesn’t mean he is any less of a person.

I went over Camden’s list of similarities to see how many of his classmates had those things in common. Most of them did. Then we went over Camden’s differences. Some things they were already aware of, and some things they learned about Camden today. I was glad to be able to talk about common ground and to also discuss some of the challenges/differences of kids with autism. Camden’s classmates were incredible! They were such an amazing audience, listening and participating and tracking with me.

We read the picture book My Brother Charlie. The pages are colorful and it’s an easy read-aloud that covered everything I wanted to get across. The book reiterated the aspects of autism I had gone over, and it talked about how these siblings were similar and different. Ultimately, it is a story of love. 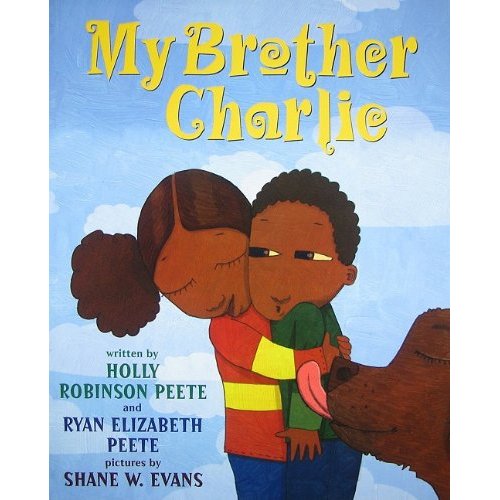 Then I addressed the various questions that the students had submitted: How many teeth has Camden lost? What is autism? What does Camden do for fun at home? What causes autism? Do adults have autism? Have we tried sign language or a communication app with Camden? Good questions! They are a sharp group!

We talked about how that just because a kid with autism may not be able to communicate, it doesn’t mean that child doesn’t know what is being said. It’s important to be kind with our words to everyone. I told the students how sometimes people assume that just because a person can’t talk or talks differently, that people may think they aren’t smart. That’s so not true! I have an uncle who is deaf. He has his doctorate and was recently honored Teacher of the Year for his district. Super smart guy. I explained how some people with autism use letter boards or their iPads to communicate. We watched this powerful two-minute video about Dillan, a young man who is non-verbal but communicates with his iPad. Amazing!

I looked into their sweet eyes and told them from the bottom of my heart how much I appreciated their kindness toward Camden. I see them high-five Camden, race with him on the playground, slide, help him in class, etc.

I sent them home with Camden’s picture and this colorful and easy-to-understand pamphlet: http://www.bridges4kids.org/pdf/Growing_Up_Booklet.pdf

I am grateful for the opportunity I had to talk with Camden’s classmates about autism.

If you have any questions, don’t hesitate to ask. If you done this before, I’d love to hear how it went.

5 thoughts on “Talking to Camden’s Classmates About Autism”